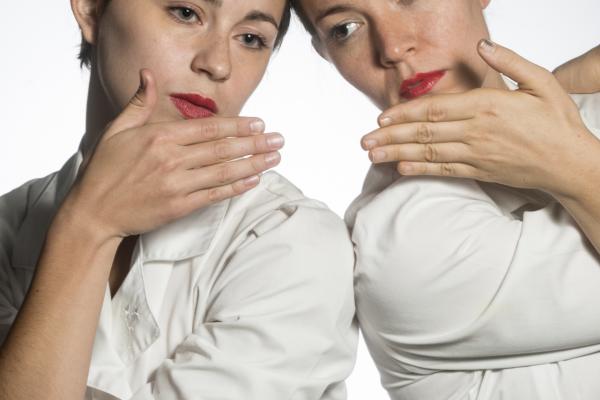 Cornering A Hare presents four installations that are accompanied by looped, live performances. The cast includes performers from the Dance and Art Departments at The Ohio State University as well as from the greater Columbus area. Sculptures by Evan Dawson and a painting by Michael Ambron (both Ohio State Department of Art lecturers) are also featured. The audience is invited to explore the gallery and spend time with the ongoing performances, which work to disband the space-time confines of a traditional concert.

As a base for her research, Phillips frames cultural practices as surreal performance art and dance works to tempt individuals to consider more carefully the role of embodied rituals within culture; to understand how traditions function in life and identity formation. In Cornering a Hare, fictionalized rituals and customs simulating meditation, pilgrimage, penance, Renaissance iconography, and trances are fused together with pop-culture to create displaced images. By juxtaposing and mixing these together with movement repetition, the emerging new images materialize the question- what belief systems are really at play?

By pairing together moving images with installations and sculptural objects, the exhibit highlights the relationship that religious rites have with structures, both physical environments and social constructions. At the same time, the artwork provides visual and sensorial experiences that asks for a revival of significant bodily traditions. In a world where communicating through technological devices is ubiquitous and popular culture suggests that happiness can be found through material goods, Phillips explores how ritualized, corporeal interactions can offer an alternative way to find meaning in the world.

Project support for Cornering A Hare is provided by AGGRS: Alumni Grants for Graduate Research and Scholarship and The Presutti-Madison Memorial Dance Fund. In-kind support from The Ohio State University Department of Dance and The Arts Initiative at Ohio State.

Paige Phillips is an MFA candidate in the Department of Dance at The Ohio State University. Before pursuing her MFA, she worked nationally and internationally as a professional dancer, choreographer, and improviser. Her work has been shown in venues such as On the Boards, Velocity Dance Theater, and Columbus Dance Theater. She has danced for Seattle artists including Cyrus Khambatta, Amy O'Neal, and Mark Haim, as well as for local choreographers Coco Loupe and Noelle Chun. Her artistic works are a hybrid of dance, performance art and installation, and she is interested in pushing endurance boundaries and reimaging religious rituals. Phillips received her undergraduate degree in dance from Cornish College of the Arts in 2005, and attended Interlochen Arts Academy from 1999-2002.