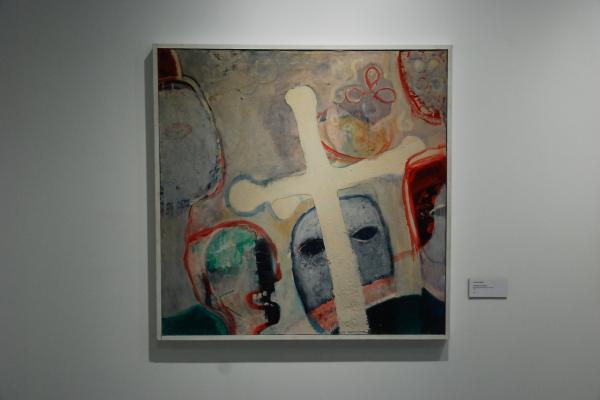 Recognized as one of the most influential theater designers in the world, Jaroslav Malina is a pioneer of "action design," using non-traditional materials and techniques to transform the stage.

This exhibition features more than 65 works of art including his lyrical, layered paintings along with set-designs and posters from the mid-1960's to the present. Viewers will also have the opportunity to see sketches, photography and a video interview of Malina himself.

Born in Prague in 1937, Malina studied at Charles University and the Academy of Performing Arts in Prague. He has served as a faculty member at universities in the United States, Japan, Finland and Great Britain, and as the general commissioner of the Prague Quadrennial (International Theatre Design and Architecture Exposition). In recent years his designs for operas have been staged in Germany and Italy.

His work is represented in the collections of Prague's National Gallery, National Museum, Museum of Decorative Arts, Museum of Czech Music and the Theatre Institute. In the United States his work can be seen at the Theatre Research Institute at The Ohio State University, the Performing Arts Library and Museum in San Francisco, and in many U.S. and international public and private collections.

His career spans more than 40 years and includes more than 450 set and costume designs for theatre, film, and television, as well as 30 one-man exhibitions of his scenography, paintings, graphics, and posters. His non-stage work, or "free work" as he calls it, and his scenic designs are inextricably linked.