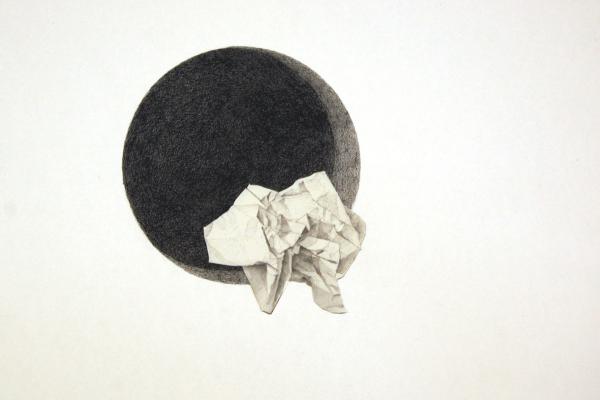 An Ayurvedic term for 'air and space', Vata is a meditation on both the far-reaching possibilities and the intimacy of drawing. Presented by City Center Gallery, Vata is an exhibition of graphite and charcoal drawings by local artist Jill Raymundo. Multiple drawings series comprise the exhibition, ranging from intricate, textural collage drawings of commonplace objects to large-scale cloudscapes based on images taken from an airplane window.

Extreme variation in both the scale and subject matter of Raymundo's drawings throw one's corporeality into relief. Raymundo's nearly photographic depiction of hair amidst a field of velvety black is both expressive and precise, while the impressive scale of her expanses of clouds draws the viewer in to realize the finesse that was required to create it.

With subtle hues, detailed marks and a thematic approach, Raymundo’s exhibition appeals to a curious and lingering eye—an opportunity to enjoy a refined technique.

Born in Manila to architect parents, Jill Raymundo was drawn to visual art at an early age. Due to the country's political unrest, her family immigrated to the United States when she was a year old, and she grew up in Toronto, Ontario; Columbus, Ohio and Vancouver, British Columbia. She attended the Columbus College of Art and Design on a full scholarship and graduated in 2004 with honors, in addition to studying at the AICAD New York Studio Program in Parsons School of Design.

Raymundo has divided her time in recent years between Manila, Vancouver and Portland, Ore. teaching art, contributing to the education department at the University of British Columbia's Museum of Anthropology, and co-creating a small eco-friendly design studio. She has had solo and group shows at the Riffe Center in Columbus, the Smithsonian in Washington DC, and several galleries in New York City, the West Coast and Manila. She returned to Columbus in 2012 to pursue her art and design work.

From morning to evening, I find myself involved in various projects and activities. I sense an incessant desire for things to be happening, for the next goal to be attained, and the next check marked off from the to-do list, but in the hectic scheme of things, at the end of the day lies the quiet space of solitude and reflection. It is in this space that I am most creative.