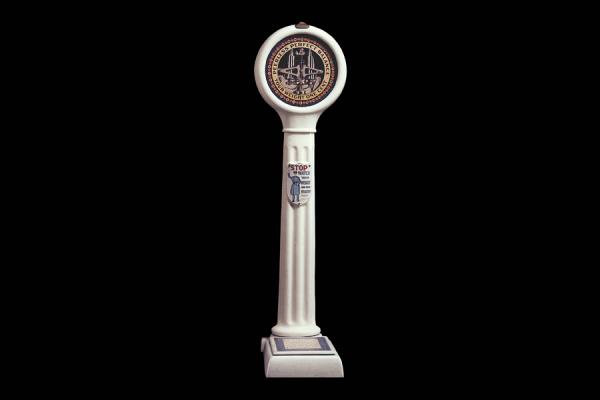 Special Hours for the Arnold Classic

The American Weigh will showcase American coin-operated weighing machines selected from the nationally recognized collection of Christopher K. Steele. This comprehensive premiere exhibition will showcase pieces spanning 102 years and take the visitor from the cast iron work-horses of the 1890s through the colorful deco period up to and including the rarest mechanism free computer scale of 1992. Come experience this highly unique national treasure that eloquently chronicles 100 years of American ingenuity and industrial design. The unusually fine condition of these scales stands tribute to the industry that manufactured them and the mores of the era that respected them.

Once corner landmarks, American penny scales stood watch like sentries across the American landscape reminding everyone to watch their weight and keep healthy. Pitched as trade stimulators and known as silent salesmen, these 'robots of trade' evoke nostalgia for simpler, healthier times and have all but vanished from the American landscape.

Along with innovative engineering, real ingenuity was required of the scale designers to attract passers-by. Horoscopes, mirrors, games of chance and other clever gimmicks were used to 'turn pennies into gold.' In their peak years, 70 times the population weighed themselves annually by dropping over 10 billion pennies, or over $100 million dollars into penny scales. This is equivalent to $1.5 billion today. The colorful designs, intricate mechanisms, and fine craftsmanship stand tribute to the remarkable accomplishments of America's first vending service.

"I've had the pleasure of seeing the collection and it certainly will appeal to everyone, from Americana buffs to industrial design connoisseurs. And I'm sure many of our AAA members will recall fondly seeing penny scales like these while idling along their town's Main Street in the family sedan. We're happy to be a small part of bringing this American treasure to the OSU Urban Arts Space downtown," said Kent Rambo, Vice President of Marketing for AAA Ohio Auto Club.

The collection includes an extensive media archive described by the Smithsonian as a valuable asset for future scholars studying twentieth century community life. Samples of this ephemera will be included in this exhibition.

All references from, The American Weigh at the Taft Museum, Cincinnati, Ohio, 1983-4. The catalogue of the exhibition of 27 penny scales was published by the Taft Museum, and included an essay by Ruth K. Meyer, Director. The Taft Museum grants use of the title to Christopher Steele.

About the Artist Collector

Chris Steele's fascination with American penny scales began in1971, at the age of 22. As he stood on a scale in the Union Depot, a downtown Columbus, Ohio landmark, he heard a voice say, "Buy all you can." Within months his lifelong passion had begun with his first acquisition of the very scale that spoke to him. Thirty-seven years and counting, he is still adding to his highly unique collection.

His interest in patina and provenance garners respect from the museums who have sought loans from his collection. The Smithsonian National Museum of American History, Taft Museum, Columbus Museum of Art, and Toledo Museum of Art have all drawn upon this national treasure.

Educated at The Ohio State University as an artist, Steele has worked as a contract potter, performance artist, and visual artist. He works with wood, canvas, paper, paint, fiberglass, metal, clay, and found objects.

He was invited by Marcia Tucker of The New Museum in New York to participate in the exhibit Outside New York, State of Ohio. His work has been reviewed in The Village Voice, The Soho Weekly News, Dialogue Magazine, and The New Art Examiner. Art critics Rose Lee Goldberg, John Perrault, and Peter Frank have also honored his work.

Steele has pursued architectural model building for the past 25 years. Thanks to his long association with projects by Leslie Wexner, his model portfolio includes work of the internationally acclaimed architectural firms of Arata Isozaki, Richard Trott, Peter Eisenman, and Heery International. His model work has appeared in Progressive Architecture and Architectural Record.

A lifelong community volunteer, Steele is founder and president of the non-profit architectural preservation group Citizens for a Better Skyline. Since 1983, the group has designed and funded many preservation and public arts projects, including the nationally recognized Mona Lisa mural in Columbus, Ohio.

Steele is an inventor and is developing a new coin-operated weighing machine. He would love to see the return of public weighing in America. Other examples of his inventiveness include earth-friendly art-making machines.

For more information about the Christopher K. Steele Collection, visit his website.