City Center Gallery 2018: Ohio Through the Lens of a Quilt Block by Chris Mercerhill 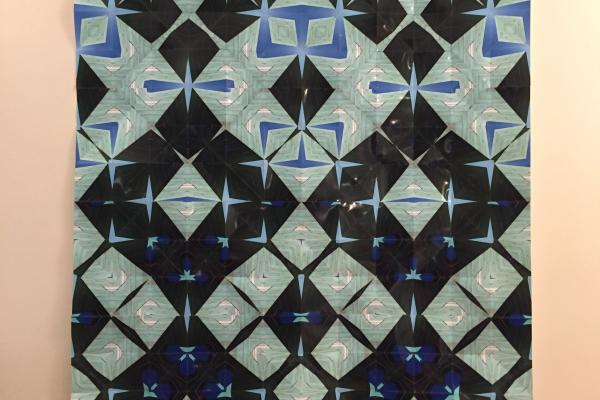 Reception: Saturday, September 8 | 5-7 PM
Admission is free and open to the public

Ohio Through the Lens of a Quilt Block is a collection of Chris Mercerhill’s stunning photoquilts created by using the Ohio Star quilt block. Since 2006, Mercerhill has been working on a series of photoquilts using the Ohio Star pattern, which alternates squares and triangles. In these pieces the original image is recognizable but the edge of every piece meets its reflection, creating a kaleidoscopic effect that blurs the boundaries between the pieces. Each row is composed of pieces from slightly different parts of the print, which results in an evolution from the top to the bottom. These large-scale photoquilts—all of which are six feet tall and four feet wide and all of which feature Ohio-based subjects—are visually dazzling works of art that capture a memory of a place, such as the Park of Roses of the Franklin Park Conservatory.