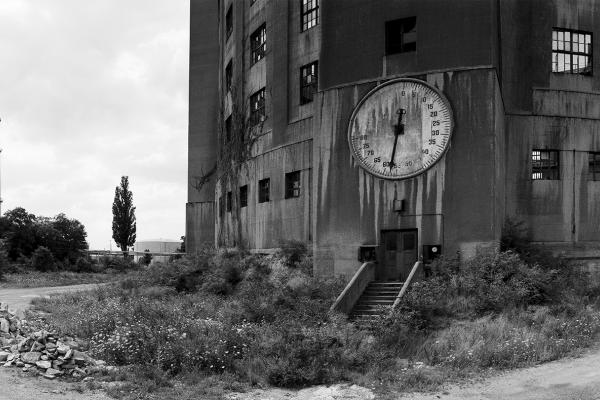 During a three-month artist residency in Dresden, Germany in 2002 and over 4 subsequent summers, Fredrik Marsh explored the city and its outskirts photographing various architectural landmarks. Encountered during the many extended walks throughout the now familiar city his efforts concentrated on photographing in black and white and color the detritus of human culture found in the decaying interior spaces of vacant factories, abandoned apartments, and hotel rooms. The resulting series demonstrates the juxtapositions and ironies still abundant in the post-Socialist world of Eastern Europe twenty years after the collapse of the Berlin Wall, showing the old and the new as well as the grandeur and the decay of these once-majestic buildings.

Fredrik Marsh was born in Quantico, Virginia; lives and works in Columbus, Ohio. He attended The Ohio State University, earning his BFA in Photography in 1980 and MFA in Printmaking in 1984. He has been teaching photography at various colleges and universities since 1985.

Marsh's work has been included in over 200 competitive and invitational exhibitions since 1978. He has given photography workshops and lectured on his work nationally and internationally, most recently in China, Germany, Italy, Poland, and Slovakia. During his career, awards received include an individual artist fellowship from Arts Midwest/National Endowment for the Arts; individual artist fellowships and artist's project grants from Ohio Arts Council, Greater Columbus Arts Council, and Saxony Ministry for Science & Art, Dresden; and a 2002 GCAC/State of Saxony artist residency in Dresden, Germany. Marsh, recently nominated for the 2009 Baum Award for Emerging American Photographers, is a John Simon Guggenheim Memorial Foundation Fellow in Photography for 2008-09.

The bombing of Dresden was a British- American aerial attack during WW2. In four raids, bombers dropped over 3,900 tons of high-explosive bombs and incendiary devices on the city. The bombing and resulting fires destroyed more than 1,600 acres. After the attack on the city in WW2, and the occupation during the reign of East Germany under the Soviets, many of the buildings have remained damaged and destitute. Part of the goal of Marsh’s Dresden photographs was to convey a mixture of melancholy and beauty, even tenderness, without sentimentality that he found in these places.

Not just homes or military compounds, but even commercial and industrial buildings faced destitution in Dresden, and Marsh strove to document all the ways that Dresden was impacted.

After WW2, Dresden fell under Soviet control, photographed above is an old Soviet military compound that Marsh found.

Marsh was interested in the remains of old houses and apartments, in the remains of ordinary lives subjected to extraordinary trauma. About these photographs, Marsh said, “the later work concentrates on interiors made first in black & white, then exclusively in color.  Not focusing on people directly, but upon their artifacts, on structures and objects bearing their imprint, the photographs I created within these vacant, unassuming factory and apartment building interiors transcend the intimate traces of unknown inhabitants whose individual work and live were subject to a broken system of regiment and surveillance.”

This abandoned grain depot has been invaded over time, evidenced by the graffiti on the staircase. This photograph is an example of Marsh’s attempts to document the juxtaposition of the old and new that have met over the years of decay of these once vibrant buildings.

After WW2 ended, Dresden fell under Soviet rule and became part of East Germany. Once the Berlin wall fell, many people left searching for new freedoms, often simply leaving buildings vacant. These vacant buildings have become magnets for vandalism and graffiti, adding color and life to buildings that had existed under a gray oppressive regime.

The hanging cloth in this abandoned building, perhaps the remnants of a laundry day, show the small ordinary parts of life that were left behind over the years of tragedy that Dresden faced.

Many apartments were abandoned after the Berlin Wall fell, this photograph is an example of Marsh’s ability to find the beauty in ruins and forgotten places.