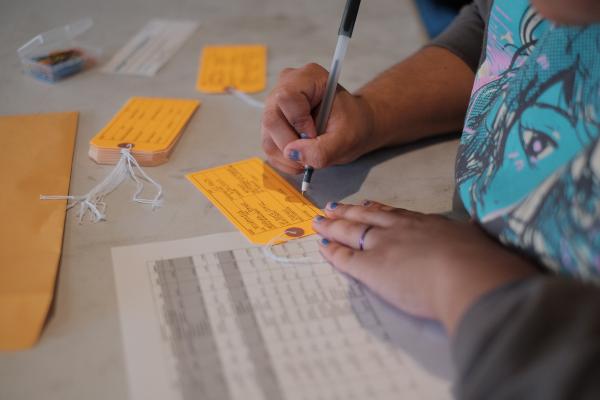 Pre-registration is required to visit Hopkins Hall Gallery. Please schedule your visit at this link.

On view at Hopkins Hall Gallery

Located 2000 miles away from Columbus, Ohio, the violence of the U.S.-Mexico border may feel distant from the daily realities of most Columbus residents. While we currently live in a world in which transnational human mobility is at its highest in history, restrictive immigration laws and the militarization of national borders have become more drastic and vigilant. Further, global inequities and the radicalization of violence have led to a large increase in the flow of refugees and undocumented immigrants at these borders. In their transit through Mexico, Central Americans face extreme levels of violence, such as mass kidnaping, rapes, and massacres. The US-Mexico border has also claimed the lives of thousands of people.

Presented alongside the “Bringing the Border to Columbus: A Virtual Symposium,” Hostile Terrain 94 will engage Ohio State students and scholars, community organizers and activists in discussions about the role of art in creating awareness of border violence. The interactive exhibition is part of Hostile Terrain 94 (HT94), a participatory art project organized by the Undocumented Migration Project (UMP). HT94 is composed of 3,200 toe tags that represent migrants who have died trying to cross the Sonoran Desert of Arizona between the mid-1990s and 2019. While visiting Hostile Terrain 94, visitors are encouraged to complete these toe tags at Hopkins Hall Gallery as they learn more about the violence at the US-Mexico borderlands.

Hostile Terrain 94 is presented in partnership with Urban Art Space's Hybrid Arts Lab, a multi-venue learning lab that experiments with how art is imagined, made, viewed and understood within physical and digital spaces.