The Monuments of Columbus 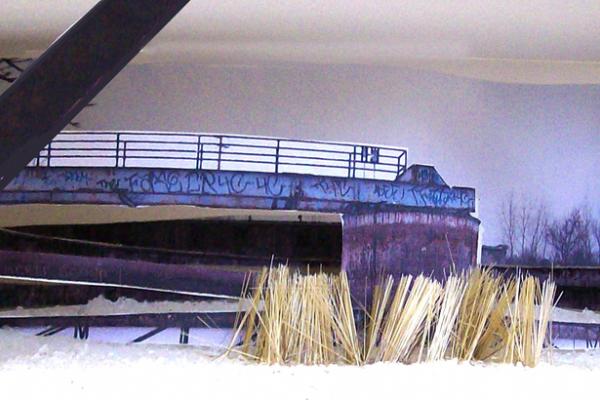 North of Interstate 670, crystalline cones of road salt change shape and elevation with the seasons. In the interchange of Interstate 70 and 670 sumac, wild rose and black locust colonizes broken concrete slabs among abandoned rail lines. West of Highway 315 cliffs and clear pools are framed by gray birch growing in fractured limestone. These feral landscapes, comprised of thickets, stockpiles, and industrial ruins structure the urban matrices of Columbus, Ohio. The Monuments of Columbus are investigations, interpretations, and figurations of these obscure sites that comprise the fringes and fallow grounds of the city.

Work exhibited in The Monuments of Columbus is both a tribute to and reinterpretation of Robert Smithson's 1967 essay "A Tour of the Monuments of Passaic, New Jersey." In the essay, Smithson frames bridges, pipes, and parking lots as a series of "monuments" that structure the relaxed urban fabric of Passaic. His essay is both a tour and a curatorial endeavor that asks us to look closer at the in-between, infrastructural landscapes that support and define our cities and towns. Matthew Coolidge of the Center for Land Use Interpretation (CLUI) is working with contemporary landscape curators operating out of Culver City, California, Troy, New York and Wendover, Utah to expand Smithson's line of inquiry into a series of nationwide exhibitions, tours, and publications to inform the public about "the nature and extent of human interaction with the earth's surface." The Monuments of Columbus begins with Smithson and CLUI, and digs deeply into the landscape zeitgeist of central Ohio.

Work in the exhibition, produced by the community of students, faculty and collaborators of the Landscape Architecture Program of the Knowlton School of Architecture at The Ohio State University, includes inventories, mappings, experimental geographies, sonic tours, and imagined and projected futures for the landscape of Columbus. This is the city-now: the ruins, remnants and piles, the sites unstewarded and open to interpretation and exploration. These are sites of imagination and speculation. The exhibition offers residents and visitors opportunities to position themselves in an alternative Columbus, as real as the one we inhabit daily. It is an invitation to transgress our ordinary spatial boundaries, to discover, inhabit, and imagine a city more wild, robust and full of possibility.

Notes on slide show: The models shown were created by faculty and students in the Landscape Architecture Program at The Ohio State University Knowlton School of Architecture. The remaining images are "sketches" for work in this exhibition. The first set of sketches, Gypsum Mountain, show a scrap yard for defective sheetrock that will become clod-breaker for soil. This sheetrock is from West Virginia and sells for $3.50 a ton. The following three sketches are the basis for the work of OSU student, John Also Bennett, in his Monuments of Rust. Next are images taken at the former site of Columbus Coated Fabrics, an important part of Columbus history, all that stands in its place is this "mountain." The final group of sketches are more diverse, but were all shot on the property of Columbus Steel Castings. This scrap yard is a holding area for all sorts of scrap that will eventually take on a new life at the casting foundry.