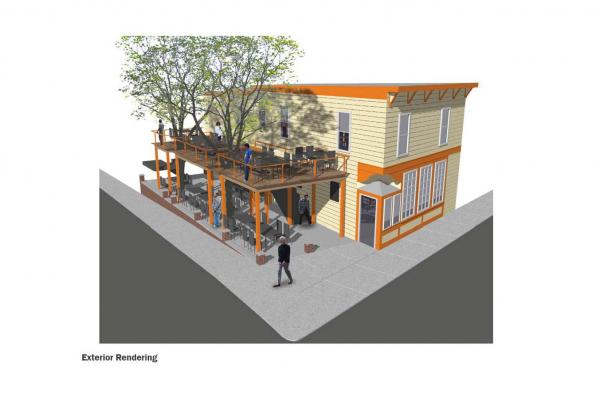 Founded in 1983 as a partnership between the City of Columbus and The Ohio State University, the Neighborhood Design Center provides planning and design services to central Ohio neighborhoods and communities. Under the guidance of professional staff, student interns from the Knowlton School of Architecture and other university colleges explore innovative design concepts in order to solve urban problems. This exhibition showcases the numerous projects that the Design Center has explored in the past year.

The Upper Space of the OSU Urban Arts Space will be transformed into a group of salons featuring four elements of the Neighborhood Design Center's mission.

The Design Center has been involved in a variety of Architectural, Landscape Architectural and Planning projects. At the core of the Design Center's work are the visualization studies and retail facade designs in the commercial corridors of urban Columbus, including the Short North, Main Street, Parsons and Cleveland Avenues, West Broad Street in Franklinton and the Hill Top. Projects also include entrances for neighborhoods such as Columbus's South Side and civic association entrance gardens such as Brittany Hills. The diversity of the Design Center's involvement in the community is wide reaching, extending into creating children's coloring books commemorating magnificent historical neighborhood buildings and overseeing homeowner sponsored street lighting programs that use privately owned sidewalk coach lights.

In conjunction with a faculty member from the College of the Arts, the Design Center sponsored a unique approach to looking at neighborhoods in the digital era. This exhibit proposes new possibilities for analyzing and synthesizing neighborhoods.

In the Short North most of the built environment has become commercial real estate. While location, ownership and market cycles are the main principles that characterize commercial real estate, there are other things that should be considered. This project presents alternative forms of examining an area within parameters of being economically powerful but not physically manifested.

The large economic impact of electronic transactions in this area suggests that the data gleaned can support future urban design models and should therefore be investigated in more depth. Places like the Short North have begun to foster new digital infrastructures that go beyond their traditional physical boundaries. The project will explore these kinds of neighborhoods where new infrastructures operate parallel to existing conditions, taking into account their long-term effects on polity and culture. The project argues that infrastructures may constitute a de facto parliament of global decision-making or an intensely spatial constituent that expands into a digital community.

The belief that new/old communities such as the Short North are simply quaint and painterly parts of a city is to completely deny their future transition into economic forces.  As community infrastructures mix with political platforms, they are often imbued with the classic drive for speculative inflated development but also with a desire to invest and turn the area into an international standards zone. The Short North has adopted these external forces of global brand capitalism, evident in its homegrown brands such as Jeni's Ice Cream, and adjusted them to best serve their needs. The acceptance and melding of global and local models creates an economic edge within the city that is quite unique.

The study associated with this project explores how people experience and interact with and within the Short North economically and socially. It's diversity and the digitalization of space by its inhabitants to become part of a larger global network makes the Short North a piece of the world at large in our global territory. Looking at cell phone usage, credit card transactions, online romance, and MySpace/Facebook affiliations gives a very different sense of what we could consider constituents of what we recognize as a "community," beyond merely the physical environment.

Landscape Architecture and Planning coupled with Architecture provide unique and expansive expertise for our visioning explorations. Our focus varies from delicate small-scale neighborhood areas to larger scale urban areas. Each receives the same careful and thoughtful design finesse. Two urban parks have been studied with intense community involvement to make one a floral park and the other a garden market park, both to be created with the intent of sustainability and evolution, for the King/Lincoln neighborhood. Also, for three years, the Design Center has served the City of Newark with studies for East Main Street and North 4th Street visioning and continues to contribute its services this summer in the Canal Area and with the connection of the east and west bike paths through downtown Newark.

As the summer evolves the entire intern staff representing Planning, Landscape Architecture, Architecture and Interiors will collaborate on a single project. The group will be advised by faculty and the topic will be revealed at the opening of this exhibition.