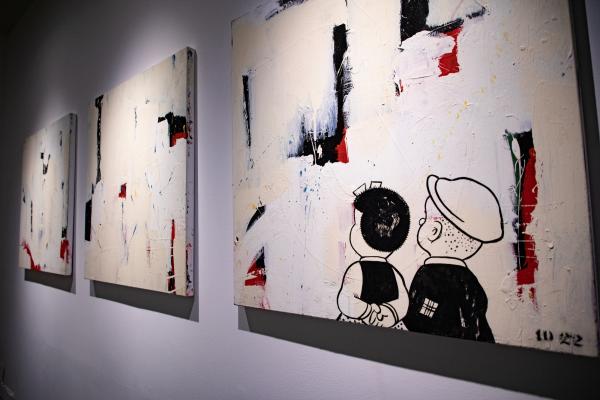 In Patrick McDonnell's ‘Side Effects: Paintings by Patrick McDonnell 2016-2021’, he juxtaposes the painterly gesture of abstract expressionism with the simple inked beauty of classic comic characters.  This is the first time the public will get to see the private side of McDonnell's art where his masterful line and expression shifts scale and intensity to surround us in an atmosphere of humor, dread and hope.

Patrick McDonnell is best known as the creator of MUTTS, a long-running, lighthearted daily comic strip featuring Earl the dog and Mooch the cat. But off and on since college, McDonnell has also made abstract paintings on the side, though he mostly has kept the work to himself.

Then in 2016, McDonnell introduced his paintings to two friends: Nancy and Sluggo, characters from the comic strip Nancy, originally written and drawn by Ernie Bushmiller (and these days by Olivia Jaimes). McDonnell added the two characters directly to his canvases, usually depicting them from behind or in profile, where they became surrogate viewers of his paintings.