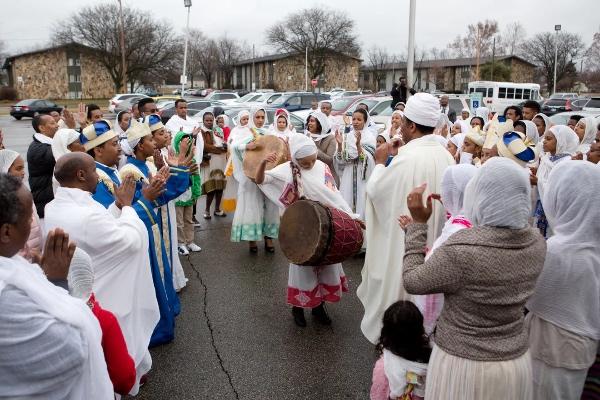 Via Jim Fischer of columbusalive.com:

“Isaac Weiner has an infectious fascination with the sounds religion makes.

Of course, most of those sounds are made by people practicing, formally or informally, a religion. As co-director of the American Religious Sounds Project, Weiner, an associate professor in the Department of Comparative Studies at Ohio State University, and his colleagues have been capturing, archiving and sharing the sonic impact of religion on life in America.

Whether we’re cognizant of it or not, Weiner explained, sound is often how we encounter religious expression and experience, either our own or someone else’s. “Sound creates moments of contact,” he said.

Bringing those moments of contact to ears beyond the people who initially experienced them is the idea behind “Religious Soundscapes,” an immersive, sonic exhibition at OSU’s Urban Arts Space.”

Via Josh Friesen of OSU News:

“Religion and sound are tied together in evocative ways.

Church bells. Public proselytizing. Calls to prayer. Tantric chanting. What does religion sound like, and how can we learn new truths about the diversity of religion in the United States when we listen?

Isaac Weiner, associate professor in the Department of Comparative Studies at Ohio State, has been probing these questions with the American Religious Sounds Project (ARSP). Through hundreds of field recordings nationwide that capture the sounds of religion at places such as homes, churches, temples, public protests and community events, the ARSP constructs a tangible sonic record that maps and contextualizes religion in profound and innovative ways.

Now, after eight years of research and hundreds of audio recordings, the ARSP is culminating in Religious Soundscapes, a reflective exhibition at the Urban Arts Space that features a series of thematic audio essays and invites visitors to experience religion as an audibly complex social, spatial, political and embodied phenomenon. The interactive, immersive exhibit opens with a reception from 5-7 p.m. on Tuesday, May 24, and runs through July 16.”