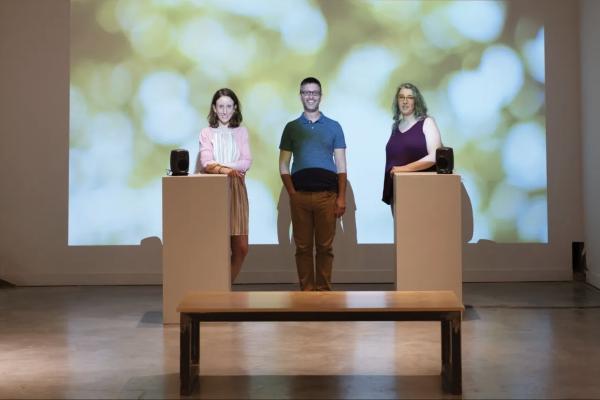 Religious Soundscapes, an exhibiition at Urban Arts Space co-curated by Lauren Pond, Isaac Weiner, and Alison Furlong, was recently featured in an article of Columbus Monthly, CD 92.9, and the Columbus Dispatch. See a snippet from Columbus Monthly below.

”What does religion sound like? To this writer, raised Presbyterian, it sounds like “The Doxology”—the weekly hymn of praise that added a burst of passion to the otherwise low-key services I attended as a child.

But religion has many sounds, reflecting its multitude of forms and the circumstances of its practice. That’s the point of Religious Soundscapes, an audio exhibition installed through mid-July at Ohio State’s Urban Arts Space, located Downtown in the former Lazarus building. The show is an outgrowth of the American Religious Sounds Project, which OSU comparative studies professor Isaac Weiner launched in collaboration with Michigan State professor Amy DeRogatis in 2014.

When they first started working on the project, Weiner says, “people assumed that when we said ‘sounds of religion,’ what we meant was really music or formal liturgy.” However, the project also includes sounds connected to religious practices conducted in other places, including the home, the outdoors and, following the onset of the COVID-19 pandemic, online. Indeed, the OSU exhibition is largely divided not by faith but by the locations in which the sound clips were recorded.”

Read more on the Columbus Dispatch.