'Willfully Neglected' Artists to be Featured on Radio Show

'Willfully Neglected' Artists to be Featured on Radio Show 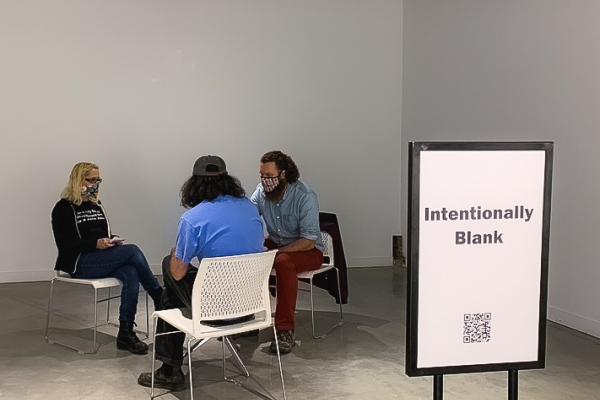 After five episodes engaging with STTLMNT: Indigenous Digital Occupation, grounded in an ongoing conversation with STTLMNT concept artist Cannupa Hanska Luger, this episode is the first in a sequence of three transitional episodes, each engaging with the implications of the STTLMNT project for expanded dialogues about art, indigeneity, and resistance to erasure by historical and contemporary colonial and imperial violence, both in the US, the UK and beyond.

Through a wide-ranging dialogue with artists Mona Gazala and Christian Casas. at their exhibition Willfully Neglected at the Ohio State University Urban Arts Space in Columbus, Ohio, this episode engages with core issues raised in earlier shows (from the use of text in visual artwork and the medium of radio to ideas of a land acknowledgment as appeasement and settler shame when confronted with living legacies of colonial violence) in terms of their respective perspectives as Palestinian-American and Cuban-American artists. Comprising a tour of their exhibition, the episode focuses on Gazala and Casas’ work created to engage experiences of forced removal and migration and racist exclusion in terms of institutional and familial archives and histories. Throughout the episode, we address the very context of the exhibition in the removal and profiting from Indigenous peoples and cultures of the land grab that created Ohio State University and how this context continues in forms of exclusion for non-white students on campus. The episode also includes music specially chosen by Gazala and Casas, by Canaan Ghoul, Daboor, Gente de Zona, Yotuel, Descemer Bueno, and Christian Casas.

An extended version of the episode – called None and Three Chairs – is available to listen to on Minus Plato’s Soundcloud. The title of this extended version refers to the three chairs they sat on during their recording of this episode placed within the empty space of Gazala’s work Intentionally Blank. To learn more about this work, visit their website.

Visit Verge.fm this Friday on June 18 at 2:00 PM to listen to this talk live!

If you can't make it to the live show, the recording will be uploaded to Broken Boxes Podcast SoundCloud (Broken Boxes is a podcast that promotes Indigenous arts) for you to listen to later.