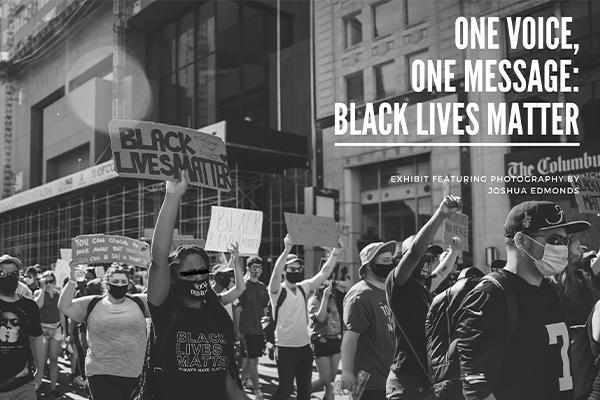 from College of Arts and Sciences News

Every day for three weeks after the video of George Floyd’s death went viral, Joshua Edmonds immersed himself in the protests in downtown Columbus.

Some days he was an activist — sharing the pain and pride with those around him and joining the demand to end systemic racism, police brutality and white supremacy.

Other days he was a photographer — capturing glimpses of the raw emotion filling the streets and telling the story of how a city gathered to voice its anguish and outrage.

A selection of his photos is highlighted in the exhibit, “One Voice, One Message: Black Lives Matter,” hosted by the Urban Arts Space’s multi-venue Hybrid Arts Lab in Hopkins Hall Gallery through Oct. 20.

“It’s showing people who came out to express themselves, whether it was anger, sadness, pain,” said Edmonds, visual media specialist for Ohio State’s Office of Diversity and Inclusion. “My photos are fragments of what was happening in Columbus, things I was a part of at that point in time. They’re my truth of what I saw.”

“One Voice, One Message” is one piece of the Hybrid Arts Lab’s broader programming this semester centered around social justice, racial inequities, diversity and self-identity. In September, Hopkins Hall Gallery was home to “Rapid Fire Text,” an improvisational ink workshop and exhibition led by Lori Esposito, a PhD candidate in the Department of Arts Administration, Education and Policy.