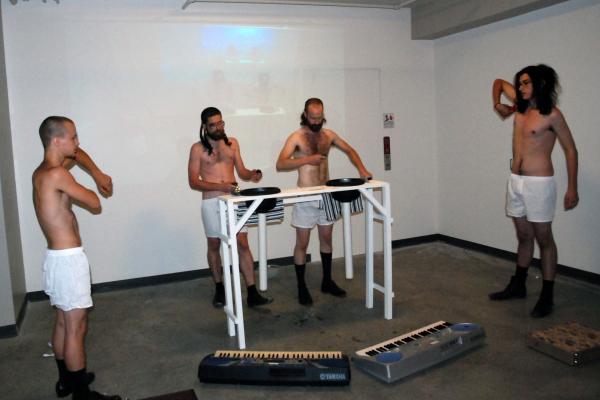 The City Center Voting Committee is thrilled to announce its decision for its launching exhibition: Chine-collé Artist Collective. The Columbus-based collective, comprised of Ross Caliendo, Todd Pleasants, Alex Ross, and Brian Sharrock, produces a vast array of pieces, including abstract paintings and a live performance.

The exhibition, also titled Chine-collé, presents a selection of innovative creations from these four local rising artists; each bringing unique and inspiring work to the OSU Urban Arts Space, to Columbus, and to the art world as a whole.

Chine-collé explores the history and implications of the transformation of Columbus' City Center Mall, from a bustling consumer venue to commercial void to future parkland. The broad range of work in the show reacts to these transformations and how each has influenced and been influenced by the changing culture in Columbus. Chine-collé takes the location and history of the OSU Urban Arts Space as a point of departure, presenting artwork that challenges and re-interprets the context of downtown's City Center.

Ross Caliendo displays large abstract paintings that re-impose a primal energy into the gallery, a parallel of the Columbus Commons initiative of the surrounding area being returned "back to nature" as a public park. Todd Pleasants re-appropriates the language of the building that houses the OSU Urban Arts Space - the old Lazarus department store - by creating a sculptural installation that references Lazarus as a biblical allusion. Alex Ross presents a multiplicity of optical lithographic prints, which create syntelating patterns and illusions of the eye. Brian Sharrock, through a sonic installation, creates a dialogue of recited Youtube message board comments as an investigation into the social relations of contemporary culture.

Chine-collé Artist Collective takes its name from the fine art printmaking technique in which pieces of paper are layered on top of an existing traditional print. This is the nature of the collective, as each member represents a new layer of content added to a preexisting framework. In early 2010, the collective was born out of a music venture that looked to exploit an instrument whose history is a clear example of technology's temporal innovation – the electronic keyboard.

By focusing on creating layers, Chine-collé begins with existing patterns and information, such as preset sound patches on keyboards, and draws upon the lineage and identity of a specific object or site as being integral to their art practice. Each member of Chine-collé brings a unique perspective to the whole; every constituent has an individual and interpretative pattern that becomes interwoven within the collective's existence.

Native to Columbus, Chine-collé is comprised of Ross Caliendo, Todd Pleasants, Alex Ross, and Brian Keith Sharrock. The dynamic strata of these four individuals creates an evolving interplay of pattern, rhythm, and cacophony. As a performance group, Chine-collé looks to implement visual and sonic layers as a narrative to the character and history of the space and substance they work with.  As a collaborative endeavor, the whole that becomes Chine-collé strives for greatness beyond the sum of its parts.

The Artists of Chine-collé

I grow organisms that expand methodically from my own personal experience, and the life that lives around me. Layering constant images sprouts a form on canvas that, over time like a plant, strives to exist and demand its own attention like any living life form. Starting with the seed of my mind, I water these organisms and tend to them like a gardener. Picking, pruning, and prodding through paint until the form is a mature enough being to exist on its own without attendance. In the end, the organism becomes its own entity and is given to the viewer to establish the image within their own personal experience. Creating organisms that are constantly giving the viewer something new with every interaction. Living, breathing, and growing without sunlight or water.

Within my work, I investigate a mantra of repetition and pattern. I approach my art making as a contemplation and extension of a singular notion, and at other times as the rendering and appropriation of an amalgam of influences. In my installations, I strive to create an experience that captures ethereal qualities of space and time, in direct reference to the components of a specific site or subject. Alternatively, in my two dimensional work, I strive for a system and experience that is particular to process and to the individual/collective layerings of meaning. Be this the weaving of line within processional drawings that evoke progressive and self-similar patterns, or the examination of physical forces and phenomenon, such as in past sonic installations, my work is relative to the mode and site of creation.

Performing through process, I engage the individual with artifacts. These artifacts are the aftermath of my performance.  Observing time through a meticulous cycle allows the individual to witness similarity. Similarity exists within my drawings. My process depicts scintillating patterns that expose the viewer to a universe in which all is identical. I see my performance the same as a tree or a human face. I recognize the parallel as a perpetuating entity in which is all. It is all the same.

I am interested in our current state of social interaction within contemporary culture. Looking at the space our interactions inhabit, the time it uses and the manner in which it is carried enables me to create a physical sense out of a verbal or literal catalyst. My work focuses around an idea of situational sculpture, those that implicate a circumstantial set of affairs. I intend to create a dialogue that is a versatile use of the inhabited and surrounding space. By forming situations that are inviting to take part in but remain not entirely interactive, causes a sense of displacement and over-barring rule on the viewer. The materials then become concerned with the conversation between themselves as the viewer is forced into a child-like state of powerlessness.