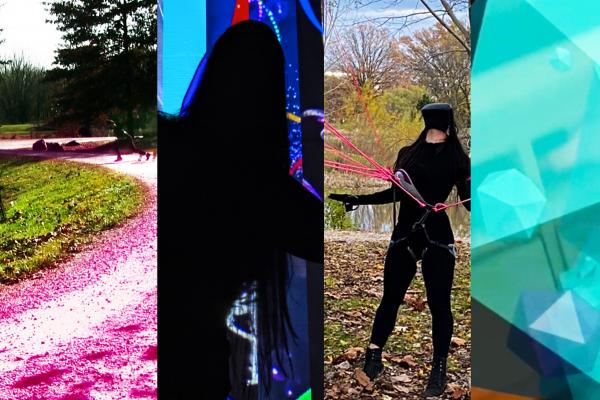 On view at UAS Online

“By creating alternate realities and bodies, I imagine transcendent representations of fantasy that effect how bodies move and are viewed. Normalizing bodies outside the conventions of society breeds optimism and hope by imagining a world that is different. Part of this radicle act of resistance imagines the future delivery of digital performative, embodied art and dance as time-based, iterative, and choice-based.”

Tara Lee Burns’ MFA Thesis in Dance, “ITERATION X” is a series of four works that not only identify as documentation, archive, and performance, but are interchangeable artworks of alternative and simultaneous realities as resistance and hope. The four works bridge aesthetics ranging from the bright colors of the VR and AR environments, thick hot pink elastic cords, and bodies of improvisation evolving from themes circling location, space, and the body as place.

Extending the Body, a live performance at OSU’s Arboretum North in October 2020, exposes a body wearing a VR headset as prothesis and signifier as cyborg or other and was described by audience members as a “cyborg ninja” in the trees.

REVEAL, a dance film, highlights dancer Angela Pujolas as manipulator of her environment as she uses thick pink elastic to stretch and peal back layers of her reality, exposing alternate and simultaneous worlds of vivid color.

a canvasUnBound, a live performance in ACCAD’s Motion Lab as documentation, is an interactive performance using painted imagery from “Extending the Body” as artifacts that react to the movement of the dancer.

moonshot: solos for your home, is an Augmented Reality App that will allow the user to watch motion captured solos activating the small spaces of their home.

Areas of research include a multidisciplinary and intersectional methodology including cyborg feminism rooted in feminist, gender, and transgender studies, digital and 3D cinema, performative drawing, and the phenomenology of the body including embodiment and affect in Virtual Reality.

Iteration X is presented in partnership with Urban Arts Space’s Hybrid Arts Lab, a multi-venue learning lab that experiments with how art is imagined, made, viewed and understood.