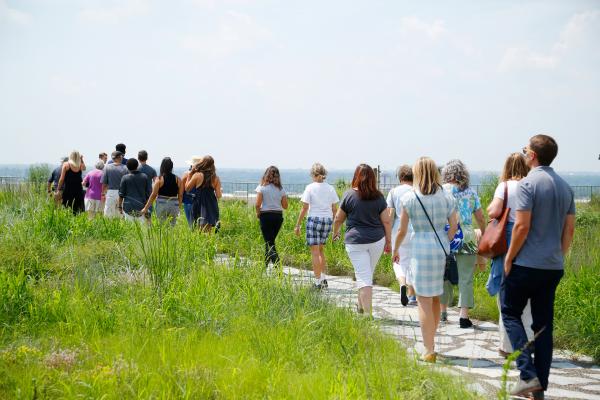 Anyone can have the opportunity to experience nature and a dazzling view of the city atop the roof of the historic Lazarus Building in the heart of downtown Columbus.

“I like going up there in the springtime,” says Lazarus Building Manager Robert Turrin. “I can just stand there, hear the crickets chirping and if I close my eyes it’s almost like I’m in the middle of a metro park out in the suburbs.”

Turin leads tours of the vibrant rooftop garden during the first Friday of each month between May and October. Hosted by Urban Arts Space, each tour is free and open to the public. Visitors have the opportunity to access and learn about the garden, as well as explore Urban Arts Space’s current exhibitions.

The garden was completed in November 2006, as part of the reconstruction of the buildings left behind after Lazarus department store closed in 2004. It was originally created as part of an effort to achieve the U.S. Green Building Council Leadership in Energy and Environmental Design (LEED) certification for the building, a green building rating system that provides framework for sustainable and cost-efficient buildings.

The main purpose of the garden is to collect rainwater, which is used throughout the building as one of its green initiatives. As a whole, the collection system can hold up to 90,000 gallons of water at a time and saves the building $20,000 annually. Additional sustainable features of the building include rubber and bamboo floors, reused wood, energy efficient light fixtures, recycled plastic materials and repurposed office furniture.

“When the garden was designed we weren’t really sure what plants would work up in this area,” says Turrin. “A rooftop garden in central Ohio had never been done before, so it was an experiment at the time.”

Sitting 80 feet up in the air, Turrin explains that the plants have to be very hearty to withstand extreme heat in the summer, as well as frigid temperatures, wind and snow during the winter. The garden includes perennial sedums, grasses, herbs and wildflowers, some of which bloom during each different season, ensuring that there is beautiful color in the garden throughout the year.

Around 500 people have the opportunity to explore the garden each year, and special tours can be scheduled for larger groups. Turrin says he has hosted tours for a variety of groups over the years, including elementary to high school students, Ohio State students, church groups, garden clubs and more.

“It’s a great opportunity for people to get the experience of being on the roof of a tall building in downtown Columbus and gain some knowledge about the benefits of a rooftop garden,” says Turrin. “Not only is it pretty, it also provides a nice environment for flora and fauna in the downtown area.”